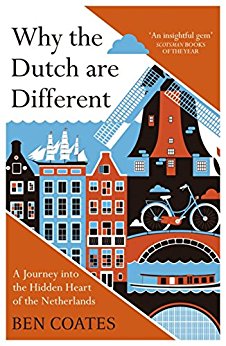 The first book to offer an in depth look at hidden Holland and the fascinating people that live there, Why the Dutch are Different is an entertaining book about a country unlike any other. The Netherlands are a tiny nation that punch above their weight on the world stage, where prostitutes are entitled to sick pay and prisons are closing due to lack of demand. After a chance encounter, Ben Coates left behind life in London to move to the Netherlands, where he learned the language, worked for Dutch company and married a Dutch wife. He takes readers into the heart of his adopted country, going beyond the usual tourist attractions and cliches to explore what it is that makes the Dutch the Dutch, Holland not the Netherlands and the colour orange so important. A travelogue, a history and a personal account of a changing country – Ben Coates tells the tale of an Englishman who went Dutch and liked it.

Before I begin this review, I just wanted to say sorry for having been so inactive on here over the past two months. A lot of big changes have been happening in my life, and my blog has sadly been very neglected as of late. I’m trying to work through my ridiculous backlog at the moment, so expect lots of reviews over the next couple of weeks!

I read Ben Coates’ Why the Dutch are Different about two months ago (I told you my backlog is really out of hand) and really enjoyed it. I’m thinking about continuing my studies in the Netherlands and went through a period of obsessive reading about all things Dutch. If you, like me, are at all interested in learning about why the Dutch are so obsessed with the colour orange or how the Netherlands came to be so flat, I would definitely recommend reading this book.

While it is not particularly profound, it does provide a funny and informative introduction to Dutch history, politics, and geography. I particularly enjoyed the personal anecdotes that were thrown in and I learnt some really fascinating facts and details. In particular, the chapters on politics and immigration were really interesting and well-researched and I loved learning more about the formation of the Dutch landscape.

Fun fact: did you know that pretty much every cliché about the Netherlands is in some way linked to the country’s relationship with water? From the windmills that were used to pump fields dry, to the flatness of the land that was left behind, to the bicycles that travelled easily across this smooth terrain, everything comes back to the country’s ongoing battle against the tides. Bricks paved roads built on dangerously soft ground; tulips thrived in the silty reclaimed soil; cows grew fat on rich moist grass; glasses of milk and beer were safe to drink when clean water was in short supply; people grew tall from drinking all the milk; and thick wooden clogs kept farmers’ feet dry when trudging through boggy fields. Fascinating stuff.

All in all, this is an entertaining and relaxing read. It is unlikely to revolutionise your world, but you might learn a few fun facts about a really fascinating country that is rapidly changing. Recommended.

Have you read Why the Dutch are Different? What did you think of it? Have you ever been the Netherlands? And do you have any recommendations for good books about the Netherlands/set in the Netherlands/written by a Dutch writer? Would love to hear your thoughts.